Scattered around town, the art includes a mix of privately sponsored works, as well as those by independent artists and those part of the Art in Public Places program.
Feb 7, 2021 1:00 PM By: Ali C.M. Watkins Angie Nordstrum, artist and owner of Erie-based Angie Nordstrum Design, stands in front of her "Greetings from Longmont" mural on the OZO Coffee building at Village at the Peaks. Ali C. M. Watkins / For the Leader

Angie Nordstrum’s mural on the exterior OZO Coffee at Village at the Peaks is a snapshot of Longmont’s character. Inspired by vintage postcards, the painting reads “Greetings from Longmont'' in bold script. Inside each letter spelling out Longmont is a scene of the city.

Nordstrum’s Erie-based company, Angie Nordstrum Design, was commissioned  last year by Village at the Peak’s owner NewMark Merrill Mountain States. Completing the project in August, “Greetings from Longmont” is one of the newest permanent murals to join a robust portfolio of local murals and public art.

“Public art plays a role in community identity and often leads to an enhanced sense of pride,” Gera Sivak-Salva, Visitor Center manager for Visit Longmont, said in an email.

It’s difficult to know how many murals decorate the city since there’s a mix of privately sponsored murals, independent artists and murals from Art in Public Places, a city program that has supported and maintained public art since 1987, Sivak-Salva said. She added that murals range from permanent to temporary paintings and are on the walls of both public and private property throughout town. However, Visit Longmont did collect a list of some notable murals for visitors and curious locals.

“Murals enhance the culture and beauty of Longmont,” Sivak-Salva said. “They are accessible and welcoming to visitors, offering a unique way to experience our city.”

Nordstrum said “Greetings from Longmont” was created to encourage city pride and serve as the background for photo ops. She said she believes Longmont has been embracing public artwork, especially during the COVID-19 pandemic that’s been isolating for many people.

One reason for adding the mural for the outdoor mall last year was to promote community. In the painting, a plane flying over Longs Peak drags a banner that reads “#Strongmont.” It’s the same name given to a COVID-19 business relief fund created by the Longmont Community Foundation and the citywide campaign to show solidarity during the pandemic.

When Nordstrum was still painting the mural last year, passersby and drivers would yell out kind words like “Thank you for painting that,” she said. 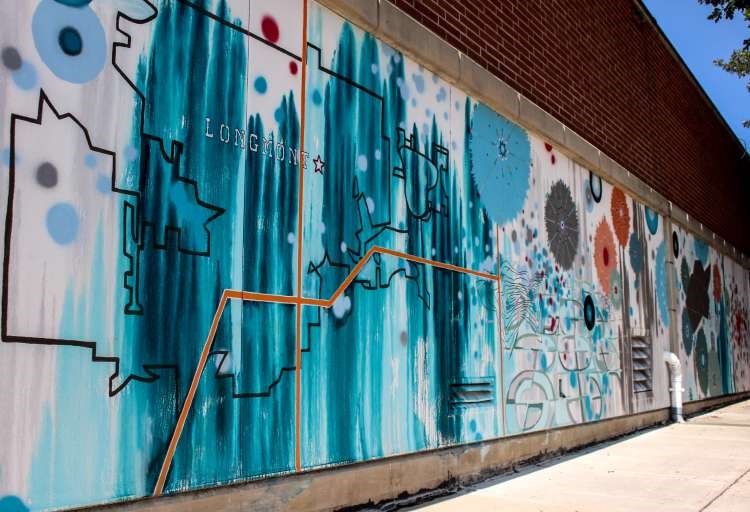 A Longmont map mural by Heather Patterson at Sixth Avenue and Coffman Street that wraps around the Comcast building. Courtesy of Visit Longmont
“I feel like the public art right now is just, it's really needed to kind of boost spirits and kind of inspire people,” Nordstrum said.

Art and public art is a part of Longmont’s identity and the city is “a community that embraces arts and creativity,” Colin Argys, marketing specialist and event coordinator for the Longmont Downtown Development Authority, said in an email. He pointed out that the city is home to the Downtown Longmont Creative District and several artists, art organizations, events and galleries.

LDDA partnered with Art in Public Places for a 2019 program, Rally in the Alley. The project commissioned six artists to create murals in six locations in the alley on the east side of Main Street between Third and Sixth Avenues. Argys said it has been a great addition to liven up alleyways and the LDDA hopes to secure funding for a similar project on the westside of Main Street or other locations downtown. He added that public art is an accessible way to engage with art.

“I think that public art is accessible and inviting to everyone in a way that a traditional gallery setting may not always be. It also puts art in front of the general public, shows that our community embraces creativity and the arts, and gives a unique sense of place that only public art can provide,” Argys said in his email.

Art in Public Places has more than 120 public art pieces, the program’s administrator Angela Brill said in an email. That includes work from projects like Rally in the Alley and “Shock Art,” an annual commission of mini murals on electric boxes in partnership with Longmont Power and Communications. Art in Public Places’ portfolio also includes installations at parks and along trails.

The Art in Public Places program is administered through the Longmont Museum and managed by the city’s Art in Public Places Commission. Longmont’s history of public art ordinances stems from “a collective realization that art is fundamental to our human experience,” Brill said.

The Art in Public Places Commission tries to represent residents by including public participation in the selection process, she said.

“What sets public art apart from a museum or a gallery is the community’s participation in the selection. Public art is intended to reflect the aesthetics, aspirations, values and ideals of its community,” Brill said in her email. “Whether or not a citizen enjoys and visits a work regularly, if it strikes conversation or defines a place in a moment in time — public art has an ability to ‘speak’ to the masses. 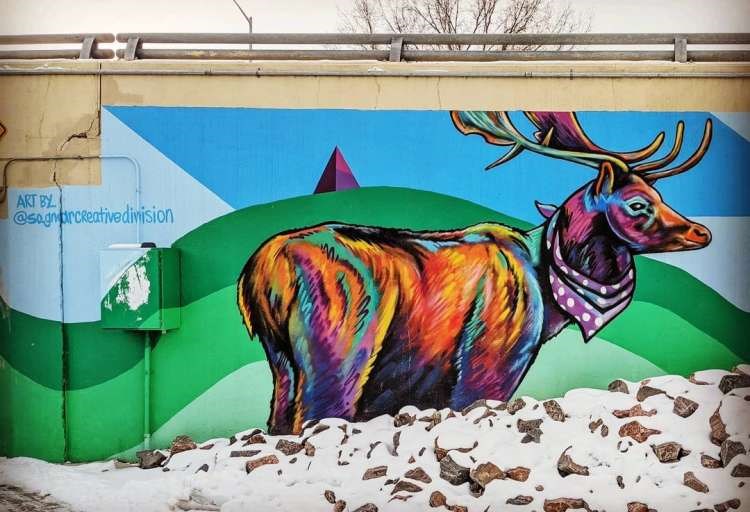 A mural by Pat McKinney painted on the Ninth Avenue underpass near Alpine Street. Courtesy of Visit Longmont

Downtown Creative District wants to establish sense of place and community
May 16, 2021 10:00 AM

Firehouse exhibit explores space between
May 6, 2021 11:00 AM
Comments