Employee pay frozen, recreation revenues significantly down but Longmont fared better than expected in a year full of unknowns.
Mar 24, 2021 9:00 AM By: Monte Whaley
Previous Next
1 / 1 Books and materials that are checked out at the Longmont Public Library are placed in a holding area at the library before being picked up by the requester. Kort Duce / For The Leader
Expand
Previous Next

Thursday marks one year since Gov. Jared Polis issued a statewide stay-at-home order as COVID cases in Colorado surpassed 1,000. Starting today, The Leader is taking a look at the impacts of the pandemic and the adjustments it prompted in organizations including city government, health care, law enforcement, nonprofits and schools.

Friday: As COVID hit community hard, Longmont nonprofits rallied to reach those most in need of help

Saturday: Petty crimes and changing procedures: Pandemic has had an impact on law enforcement, criminal justice

Sunday: School during the pandemic: The good, the bad, the ugly, and what the future holds

When COVID-19 restrictions ceased many city services in March 2020, the city suddenly faced a $13 million shortfall in a $340 million budget, while residents and employees were left unmoored because access to the library, gyms and other recreation facilities was cut off.

The Longmont Public Library quickly adapted with online programs, curbside delivery of books and materials and even a “Text-a-Librarian” service to allow two-way talks between patrons and staff, library director Nancy Kerr said via email.

Still, it just isn’t quite the same as eye-to-eye contact with inquiring patrons and eager staffers, Kerr said. Many library-goers of every age “miss the opportunity to browse for their own materials, many more miss the library as a gathering place and study place for connection,” Kerr said.

Even through 2021 and beyond — when a COVID vaccine may afford herd immunity for residents — some remote services might continue, including online storytimes for those who can’t come to the library, she said.

“... But the connection with other parents, with our staff, and other members of our community, is missing,” she said. “We miss our patrons as much as they miss us.”

Once COVID recedes, it will still take time for many services to recover to their former levels, City Manager Harold Dominguez said.

“We just can’t flip a switch to get things back on line operation side,” he said.

Those include $119,524 for human services and efforts to reduce homelessness in the city; $50,000 for one-time resources in early childhood education; $136,137 in ongoing funding for air quality monitoring and $186,810 for emerald ash borer management, according to the 2021 budget.

A move to create railroad crossing quiet zones also got $2.2 million in the 2021 budget and an Advance Metering project is still advancing, Dominiguez told city council members in his budget message last year.

Longmont, Dominguez said, will stick to its policy of not using one-time revenues to pay for ongoing expenses, even in the worse economic times.

“Our realistic and conservative approach to estimating revenues has been a key factor in ensuring the city’s financial integrity during the economic decline we endured in past years,” Dominguez said.

Business closures grew as well and projections that a shortfall in use and sales tax revenue for the city would reach $13.2 million, said Jim Golden, Longmont’s chief financial officer, via email.

As it turned out, Longmont’s sales and use tax projections were off and in a good way, Golden said.

A looming recession did not happen and sales from big-box retailers, internet shopping, liquor stores and marijuana outlets helped keep Longmont’s economy from sinking, he said.

“Just a collection of all of those things, just went right for us,” Golden said. “It was not as bad as we predicted.”

Even when facilities were able to open by June, occupancy limits prevented a meaningful rebound, he said. Prior to COVID-19, as many as 1,200 people daily passed through the Recreation Center doors. In 2020, that number was close to 275.

“The biggest challenge was that we couldn’t see any (daily or monthly) passes because it didn’t make much sense for people to buy passes for places that were closed,” he said, referencing sales of monthly and daily passes.

“When any day was nice, even in January, February and March of this year, golf courses were still very busy,” he said. “People just wanted to get out and get some fresh air.”

Longmont also will emphasize outdoor exercise classes through the summer, a trend that skyrocketed in popularity last year.

“It’s just easier to distance themselves,when people are working out outside,” Friesner said.

More online exercise classes will be offered as well, so people can work out at home, he said.

In October, Councilmember Joan Peck argued the city council should spend at least some of its $95,000 contingency funds for the chronically underfunded library.

“I am always a huge advocate for the library, give them what they need,” Peck said during a council meeting in October.

Council in January also tapped into its contingency fund to put up $32,000 to keep the Ice Pavilions at Roosevelt Park running through March. This after hearing from several parents who wanted the youth hockey season extended despite budget concerns.

“If anybody would ask us (the parents), we’d pitch in to help the city keep this rink open, at least through March, parent Gary Mess told the Leader in January. “It just means so much to us.” 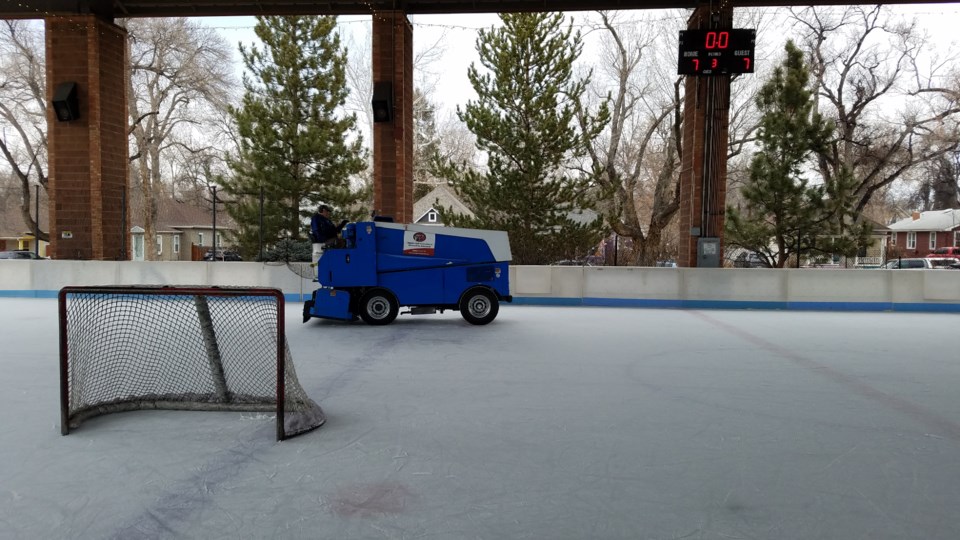 The Zamboni prepares ice at the Longmont Ice Pavilion before a youth hockey game on Jan. 24, 2021. By Monte Whaley

COVID cases rise in local children, Boulder County concerned about next school year
May 6, 2021 7:00 AM