After 2-hour confrontation, police arrest man who was threatening people with hatchet

The man, identified as a transient, was armed with a hatchet and was threatening city employees and contractors conducting Resilient St. Vrain Project work along the St. Vrain Greenway, according to a news release from police.
Sep 18, 2020 8:39 AM By: Longmont Leader Staff

A 53-year-old man was hospitalized Thursday with non-life threatening injuries after his arrest brought to an end a more than two-hour confrontation with Longmont police.

The man, identified as a transient, was armed with a hatchet and was threatening city employees and contractors conducting Resilient St. Vrain Project work along the St. Vrain Greenway, according to a news release from Longmont police. The location in the 1200 block of Boston Avenue is within about 1,300 feet of Twin Peaks Charter Academy and across St. Vrain Creek from a residential neighborhood, Jeff Satur, deputy police chief, stated in the release.

Longmont police Sgt. Collin Jessen arrived about 12:25 p.m. and as he approached, the man returned to his camp and emerged with the hatchet, according to the release. Jessen drew his gun and the man armed himself with a railroad spike, according to police. Jessen established a perimeter, keeping his distance as he tried to negotiate with the man, Satur stated. 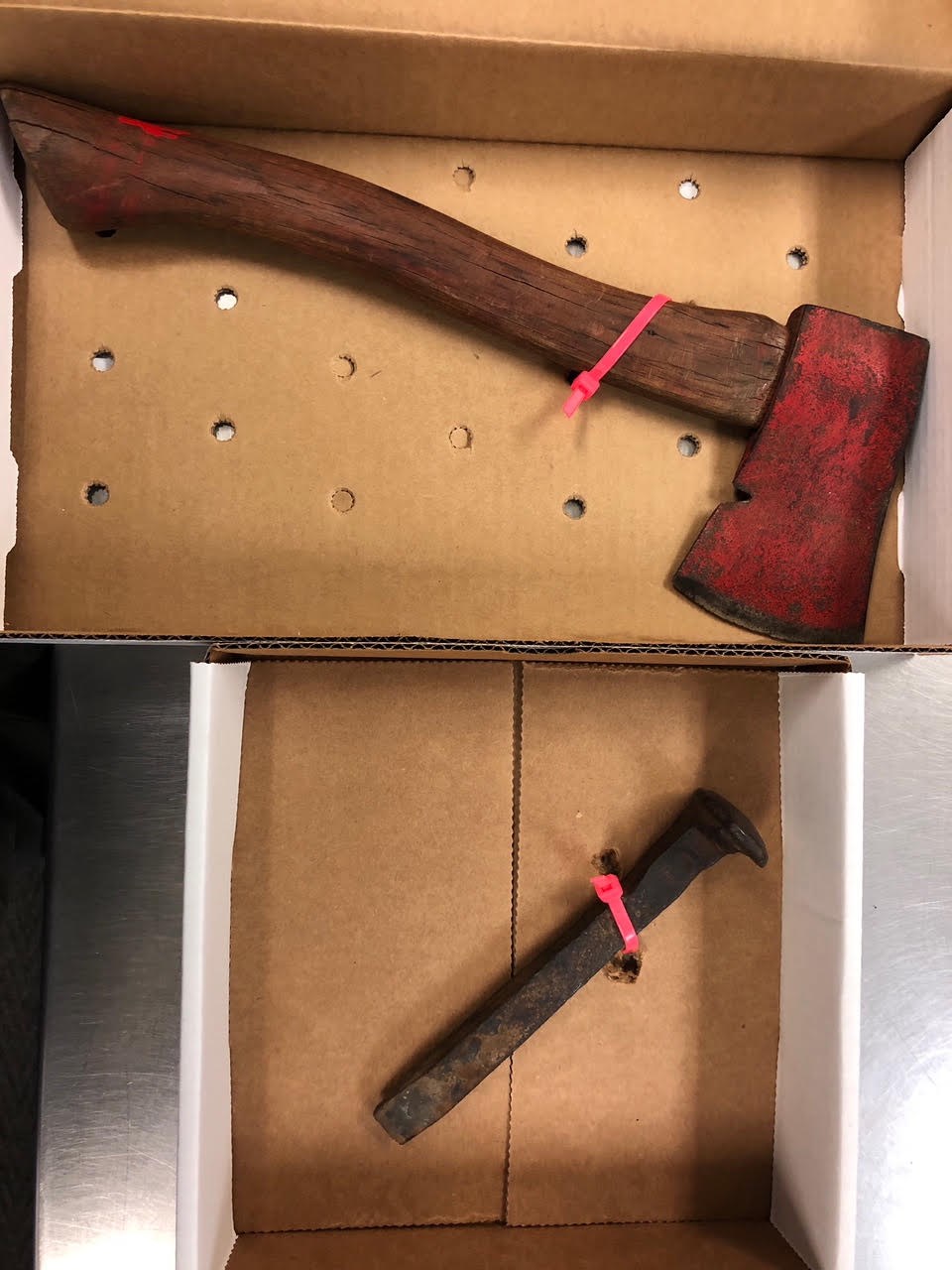 The hatchet and the spike with which police say a transient armed himself during a confrontation with officers on Thursday.(Photo courtesy of Longmont Police Department)

Negotiations continued for about two hours and 15 minutes, during which time several officers who knew the man, including members of a co-responder team, tried to establish a dialogue and convince him to surrender, according to the release. Co-responder teams are part of the Crisis Outreach Response and Engagement, or CORE, program and include a behavioral health clinician, paramedic and specially trained officer, according to the city website. The teams typically handle mental health-related calls for service, Satur stated in the release.

The man continued to disregard requests to surrender and continued threatening officers even as he was warned force could be used against him, according to the release. About 2:45 p.m., police deployed non-lethal baton rounds and a K9 apprehended him.

“Officers showed great restraint and patience,” Satur stated. “Unfortunately, the suspect chose to remain armed, continued threatening the officers, and was a threat to the community. Officers could not establish any meaningful dialogue. The suspect remained armed and threatening, and his mood fluctuated between angry and non-communicative.”

The man was transported to a Longmont hospital and later to a Denver-area hospital to treat injuries from a K9 bite. Once released from the hospital, the suspect will be transported to the Boulder County Jail for three counts of felony menacing.

Longmont police report: October 22, 2020
Oct 23, 2020 10:43 AM
Comments
We welcome your feedback and encourage you to share your thoughts. We ask that you be respectful of others and their points of view, refrain from personal attacks and stay on topic. To learn about our commenting policies and how we moderate, please read our Community Guidelines.