Jennifer Ferguson is trying to keep her finger on the pulse of Longmont and help the community find each other.
May 18, 2021 8:00 AM By: Matt Maenpaa 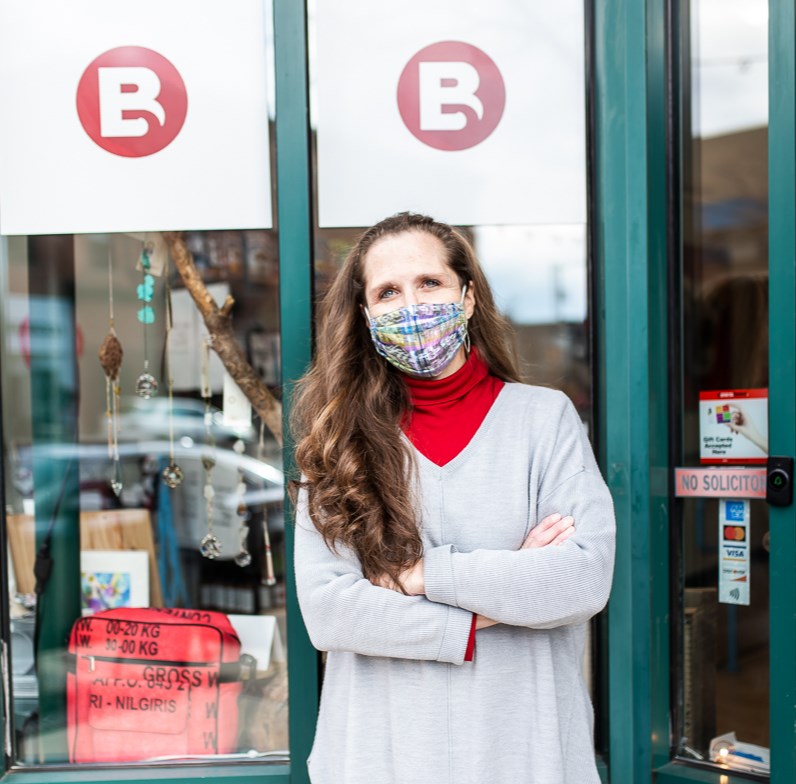 Jennifer Ferguson stands in front of the Bricks Retail entrance at 320 Main St in Longmont.Branded Beet

From Wonder Tours and BricksRetail to Longmont New Tech meetups, Jennifer Ferguson is trying to keep her finger on the pulse of Longmont and help the community find each other.

Ferguson grew up in Boulder, raised by her single mother. In high school, she was president of her business club. She’d eventually go on to obtain a Master’s in Business and another in Education. Ferguson learned she wasn’t cut out for the bureaucracy of teaching, but was still fascinated by business.

“I was always interested in the business aspect. I can’t say that I’m better at it,” Ferguson said. “I wish I could say I have a natural talent for it, but I have a passion for it and I’m full of ideas. I have a natural inclination to believe that I can do things, and that’s gotten me both good and bad.”

Before moving to Longmont around a decade ago, Ferguson worked at the county jail in Orlando, Florida.

“That whole job was all about connecting people with resources, ” Ferguson said. “Everything I do has a common theme of talking to people, sharing things. Everything I do I consider related to that theme.”

“I tend to be a firm believer that I want to make money and I'm an entrepreneur,” Ferguson said. “I like to focus on the things I want to do and that I feel are meaningful.”

Ferguson worked for Boomtown Accelerators, a Boulder-based company that worked to jump-start businesses in the early startup stage with connections to investors and other resources. Her work with startups led her to put together the earliest versions of Longmont Startup Week with other local innovators and investors. Her fascination with Longmont’s ecosystem of businesses and entrepreneurship have evolved since then, to connect the people of Longmont with businesses and products they might not have heard about.

“If I had to choose one word to describe Jennifer I’d choose ‘connection’. She is always connecting people with businesses, professions and products, and supports everyone with quality resources,” said Alicia Beeson, creative director for XSEED Design and owner of Wispy Greens. “She has an entrepreneurial spirit that never quits and I admire her tenacity.”

This year Ferguson plans to use her ability and drive to connect the community on two main projects, expanding her tour business,  Wonder Tours, and moving BricksRetail into a permanent location near Main Street.

Wonder Tours started almost five years ago, booking space on Longmont’s BrewHop trolley to take locals on guided food tours, introducing them to new bars and restaurants they may not have heard of.

“When I was around 9, growing up in Boulder, my mom did a ‘Parents without Partners’ food caravan. We all got in our individual cars and went around to food trucks, bars and restaurants and tried different places,” Ferguson said. “After I moved to Longmont, I started going to restaurants around town, trying different places, telling people about it. Wonder Tours got started as a way to share what was happening around Longmont and connect people to businesses they might not have heard about before.”

The pandemic put plans for Wonder Tours on hold for 2020, due to restrictions on enclosed spaces for both shuttle services and for the bars and restaurants. As vaccine rollout continues nationwide and restrictions start to lift, Ferguson is ready to bring back the Wonder Tours and share the bounties that Longmont has to offer.

Dates are still being solidified, but the next big event for the Wonder Bus will be exploring the agricultural diversity of Longmont and its surroundings.

BricksRetail started in October 2020, intended as a pop-up to run through the holidays, but has grown in popularity with both sellers and locals. Ferguson has used the storefront, currently occupying the front half of the Longmont Downtown Development Authority office, 320 Main St., to connect several small Colorado businesses with consumers.

“Bricks has been an experiment that continues to evolve,” Ferguson said. “We started with about ten companies and as of April we have around fourty-three.”

Ferguson has kept the focus of Bricks on Colorado companies and products, with a greater push for Longmont creators and producers. The product mix and creators involved continue to shift and change within the space.

“Early on I discovered that people who choose to participate bring a certain mix of products,” Ferguson said. ”To have an interesting retail space we had to start curating other products that would be complementary to what was already in there, to provide a nice retail mix.”

Ferguson wanted to solve a problem, while providing burgeoning entrepreneurs a place to showcase their goods without having to manage the cost of a retail storefront directly. Ferguson refers to it as a sort of retail co-working space.

Members, or BrickTailers, get benefits like membership in the Longmont Area Chamber of Commerce, access to Longmont’s TinkerMill makerspace, networking, events and more. Participants can also operate on a more traditional wholesale/retail model with Bricks. To bring in more creative options, Bricks is opening up options for creatives to sell books or albums for a small yearly fee and percentage of sales to the store. The store will host its first book signing on May 22, with Longmont author Jenny Balagna.

Ferguson said her next move for Bricks is relocating to a permanent space, though she wouldn’t say more until details had been finalized. Ferguson has also brought Bricks on the road, bringing the mobile pop-up to festivals like Left Hand Brewing’s Hops for Hope in March 2021 using her Wonder Tours bus.

“I’m always trying to solve a problem. People love buying local but it's harder because they have to go from place to place and don’t always know when stores are open,” Ferguson said. “So having this curated space, and tying in WonderTours, you can find local places, products and services under one umbrella. Bricks is all about introducing people to new products and making local gift giving easier.”

“We are so fortunate to have Jennifer here in our community,” said Monica Fitzpatrick, owner of Elevated Yoga. “Her ability to bring people, products, and ideas together has created ripples of positive impact for so many businesses beyond her own.”