The closures will begin later this month and extend to September. City officials said if the closures are not bringing more foot traffic into shops and restaurants after 30 days, they can pull traffic-control barricades and return Main Street to normal.
Jul 1, 2020 2:45 PM By: Monte Whaley 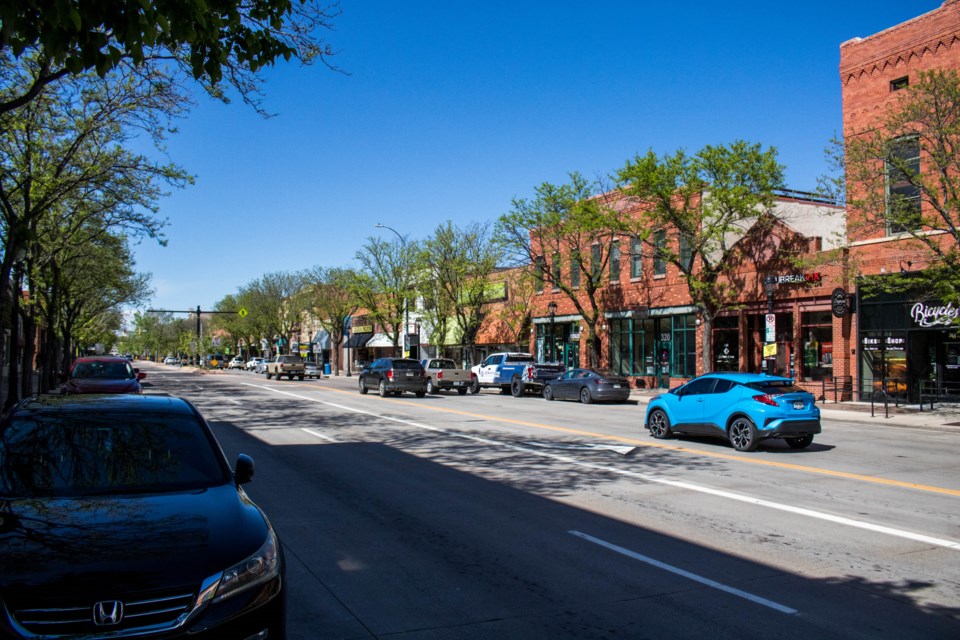 Longmont City Council on Tuesday approved a plan to close a lane of Main Street in each direction and eliminate on-street parking between Third and Sixth avenues to try and boost businesses impacted by the coronavirus pandemic. (Photo by Macie May)

City Council on Tuesday night unanimously agreed to close a lane of Main Street in either direction between Third and Sixth avenues, saying it could help revive downtown businesses choked by COVID-19 closures and restrictions.

“I do think it’s worth a try,” Councilwoman Polly Christensen said. “At least give it to the end of September. We have to do something to help people.”

Council signed off on the plan by approving an intergovernmental agreement between Longmont and the Colorado Department of Transportation for a special use permit for restaurant and retail use of Main Street, which is U.S. 287.

The closures will begin July 6, according to a news release from the Longmont Downtown Development Authority, and will extend to September. City officials said if the closures are not bringing more foot traffic into shops and restaurants after 30 days, they can pull traffic-control barricades and return Main Street to normal.

“We will take 30 days and if anything happens, if this falls on its face, we can … remove the barricades,” said Phil Greenwald, Longmont’s transportation planning manager.

The governing board of the Longmont Downtown Development Authority approved the lane-closure idea last week, claiming it would allow shops and restaurants to expand outside into the street to meet social distancing requirements. Officials said other cities are trying the same method to breathe life back into failing businesses.

Something has to be done quickly to save the downtown during the COVID-19 era, LDDA officials said.

“We’ve experienced sudden shuttering of many of our local businesses,” said Chris McGilvray, vice chairperson of the Downtown Development Authority board. He also is chair of the Longmont Area Chamber of Commerce board.

Downtown — the largest concentration of locally owned businesses in Longmont — is being hit especially hard, he said.

Shutting down one of Main Street’s southbound lanes and one its northbound lanes — while also eliminating curbside parking alongside the closed lanes — would increase foot traffic. “It would encourage us to slow down, hopefully, and buy stuff,” McGilvray said.

“Let’s give it a shot,” added Kimberlee McKee, executive director of the LDDA. “A rising tide will lift all ships. We won’t know if this works unless we try.”

The expanded outdoor space also can allow businesses to conduct meetings, classes and gatherings, while still maintaining social distancing protocols, the Longmont DDA stated in its Wednesday news release. "As part of its certified Colorado Creative District designation, LDDA will also be partnering with ArtWalk to enhance this area with creative activities and artwork".

McKee, in the release stated, “The community has asked for Main Street to be a pedestrian mall for years. With the governor's Can Do Community Challenge, we feel this is an innovative way to reuse public spaces and help businesses thrive in a world of social distancing. Based on public health recommendations and consumer confidence, increased outdoor options enhance the safety and comfort of the community and expands the way we do business in Longmont.”

But Haydn Peacock, co-owner of the downtown Chinese Medicine Clinic at 385 Main St., said eliminating parking spaces would choke businesses like his.

“This proposal is going to cause chaos downtown,” Peacock said.

A number of respondents to a Longmont Downtown Development survey on the idea expressed similar concerns, but the majority of the 48 who participated favored the idea.