Patrons and outside consultants see the library as a “good old-fashioned” library desperately in need of an upgrade, Nancy Kerr, the library director, said Tuesday.
Sep 17, 2020 7:00 AM By: Monte Whaley 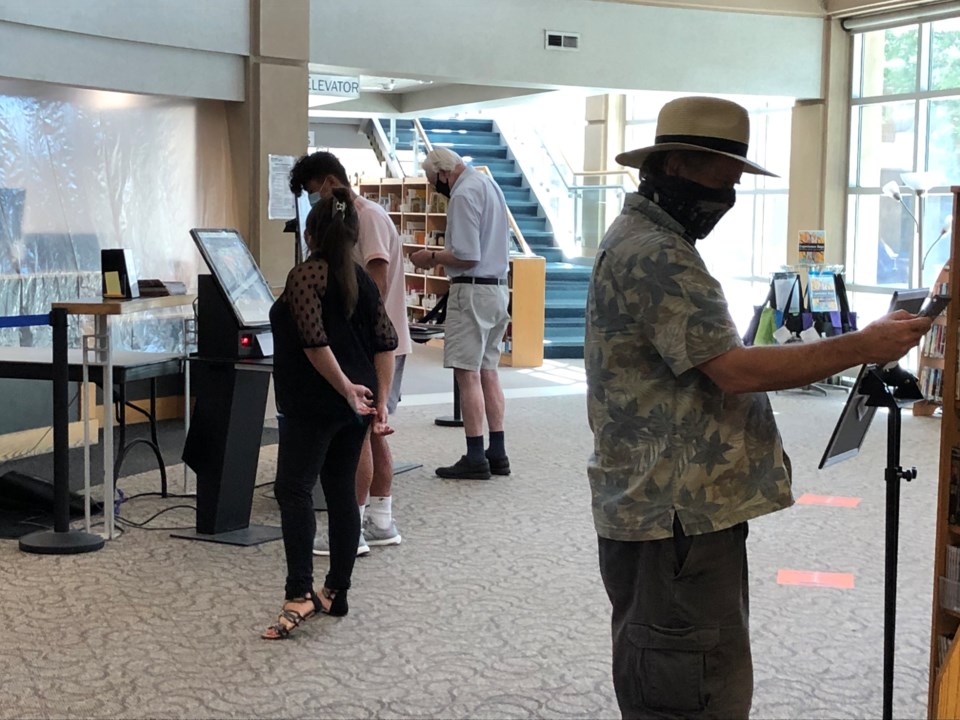 Patrons wore masks and kept their social distance on July 23, the day the Longmont Library reopened after being closed in response to the coronavirus pandemic. (Photo by Macie May)

Longmont Public Library patrons are fiercely loyal but find the facility lacking state-of-the art technology, accessibility and in the size of its collections.

In all, patrons and outside consultants see the library as a “good old-fashioned” library desperately in need of an upgrade, Nancy Kerr, the library director, said Tuesday.

“The library does the best it can but it doesn’t reflect the progressive nature of the community,” Kerr told city council during a Tuesday work session to discuss Longmont’s proposed $371.78 million budget.

Kerr summed up the preliminary assessment of Kimberly Boland and Associates, which was hired to do a feasibility study to gauge Longmont’s desire for a library to meet the needs of a  21st century patron, city officials said.

The consultants conducted a community survey in both English and Spanish in 2019 and collected 1,500 responses.

The consultants found the community uses and values the library. Expenditures are low compared to libraries of the same size.

But the facility is too small to serve a city as big as Longmont, consultants said, adding the number of print materials is strong but the library’s digital holdings lag.

The library needs an infusion of money to bolster the help it gets from the nonprofit Friends of the Longmont Library, which funds nearly all of its programs, the consultants said.

Kerr said patrons want more items and services for nearly every age range and they want the library to open earlier and on Sundays year-round. “People are very upset when the library closes,” she said.

Patrons see the need for on-site instruction on how to access computers and other technology, Kerr said. They also want the facility to include a coffee bar or coffee cart, she said.

The current library, at 409 Fourth Ave., a block east of downtown Longmont, is about 51,000 square feet and was built for a population of up to 68,000, Karen Roney, Longmont’s Community Services director, said in an email.

The consultants said having a single location for a library is unusual for a city the size of Longmont. That is “unless the single library facility is very large,” staff said in a report to city council.

The library circulated 1,151,060 items last year from its single facility, Roney said. Those included 1,029,096 physical items. She also pointed out that other libraries with higher circulations are multi-branch systems, and most are open for longer hours.

Roney said the demand for digital resources grew even more after the state’s Stay at Home order was implemented in the spring. The proposed budget includes $22,000 in one-time funding for digital resources for children and adults who otherwise wouldn’t have access to what they need for online learning, she said.

The consultants came aboard after discussions began last year over whether the city should form a tax-supported library district.

Councilmember Tim Waters said the library appears to be underfunded by about $800,000 when compared to similar facilities in the state. The funding to bring the library up to par is not going to be wrung out of the city’s already tight budget, he said.

The library might have to turn to the community for help, he said.

“We have got to give the community a reason to be willing to make an investment to create a 21st century library system in Longmont,” Waters said.