Longmont resident Jaime Gaston will compete in the Miss Colorado for America pageant on July 15. She said she not only hopes to make her hometown proud, but also to inspire her two pageant-winning daughters to follow their dreams.
Jun 27, 2020 4:00 PM By: Macie May 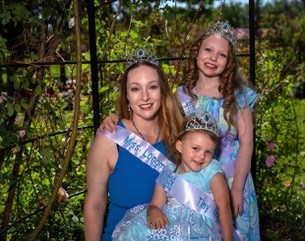 Longmont resident Jamie Gaston will compete in the Miss Colorado for America pageant on July 15, 2020. daughters, Ashlyn Marie, 8, and Kynslie Rose, 3, have followed in her footsteps by taking the crowns of Little Miss and Tiny Miss Longmont. (Photo courtesy of Jamie Gaston)

Miss Longmont Jamie Gaston received her crown in April. Recently her daughters have followed in her footsteps by taking the crowns of Little Miss and Tiny Miss Longmont.

Gaston's daughters, Ashlyn Marie, 8, and Kynslie Rose, 3, are stepping into their mother’s heels beyond playing dress-up.

Gaston began in modeling and print fashion before moving on to pageantry. As a mother of three, she now has an opportunity to encourage her daughters to follow their dreams.

“They have big goals and dreams with a lot of mama’s love and support,” Gaston said.

Gaston is Longmont’s representative in the Miss Colorado for America pageant, currently scheduled for July 15. At the pageant, Gaston not only plans to represent her hometown but to act as a role model to her two daughters. These two young ladies “look up to their mom,” Gaston stated in a press release.

This year’s Miss Colorado for America event is expected to be modified due to the coronavirus pandemic. It will be filmed and aired on the big screen at the DenverMart Drive In. “It will be a night of family fun, decorated vehicles in support of your local titleholders as we watch who will wear the titles in 2020,” Gaston said.

“This will be my first-ever state pageant, so I thank you all for your continued support as I embark on this exciting new venture,” she added.

If Gaston wins the title of Miss Colorado for America she will be invited to the Miss for America pageant expected to be held in Las Vegas in August.