Following their dreams while drawing a crowd leaves these daredevils in their happy place.
Sep 14, 2020 10:00 AM By: Macie May 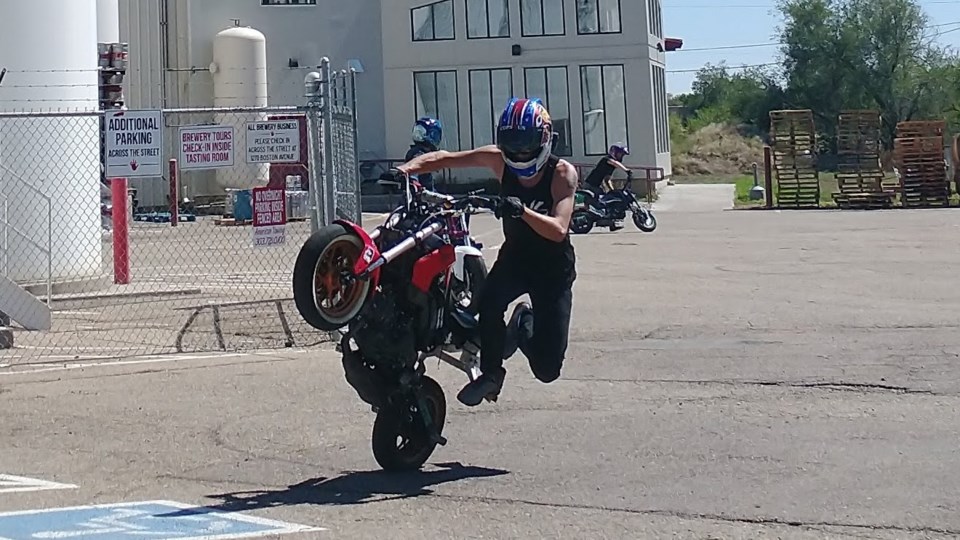 Patrons at Left Hand Brewing Co. were treated to some free high-flying entertainment as they sipped their cold brews on Sunday as motorcycle stunt riders gathered in the parking lot. 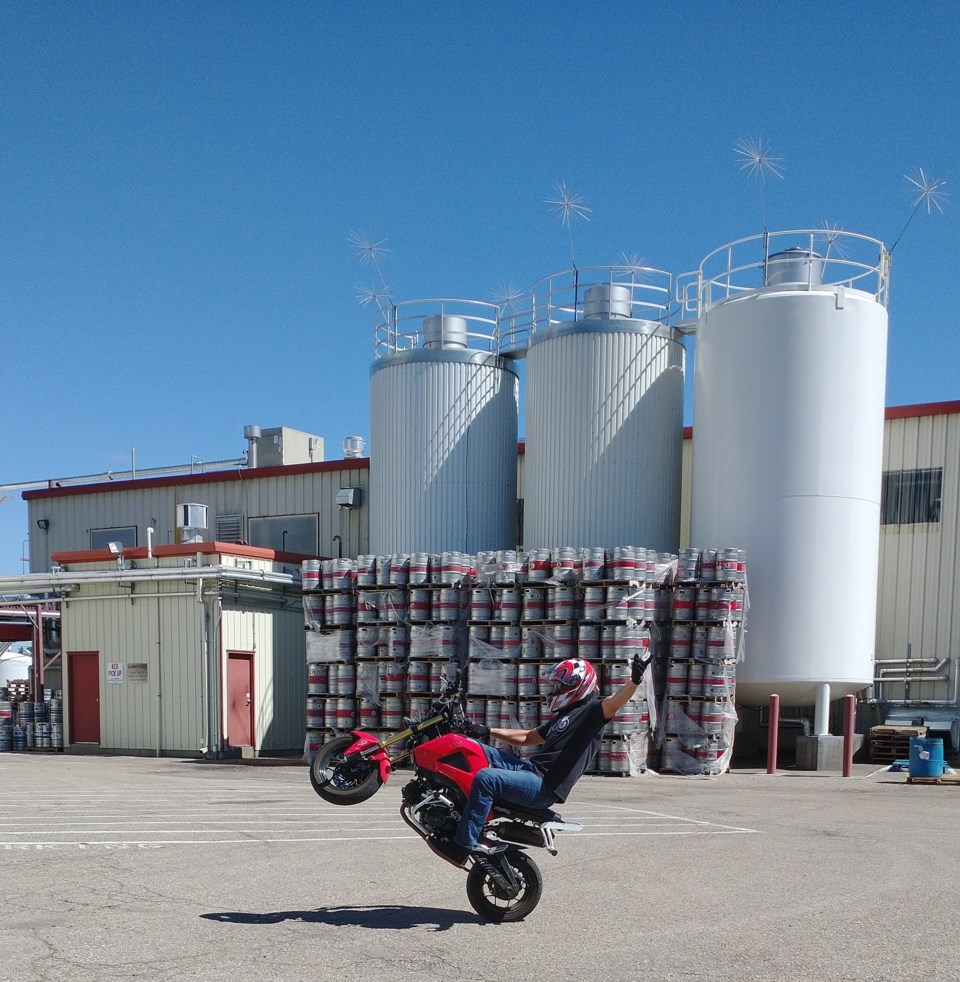 Delis hoped to use the event to draw more patrons to the brewery but is being cautious to ensure the riders don’t draw crowds that exceed coronavirus safety mandates.

“I’m all about throwing noodles at the wall and trying new things because there is always a faction of our community that digs stuff that even I don’t know about,” Delis said.

The group of riders is working on a name, but because of the stigma associated with the sport of motorcycle stunt riding, none of the riders felt comfortable being identified by more than their social media handles or rider names for fear of retribution. 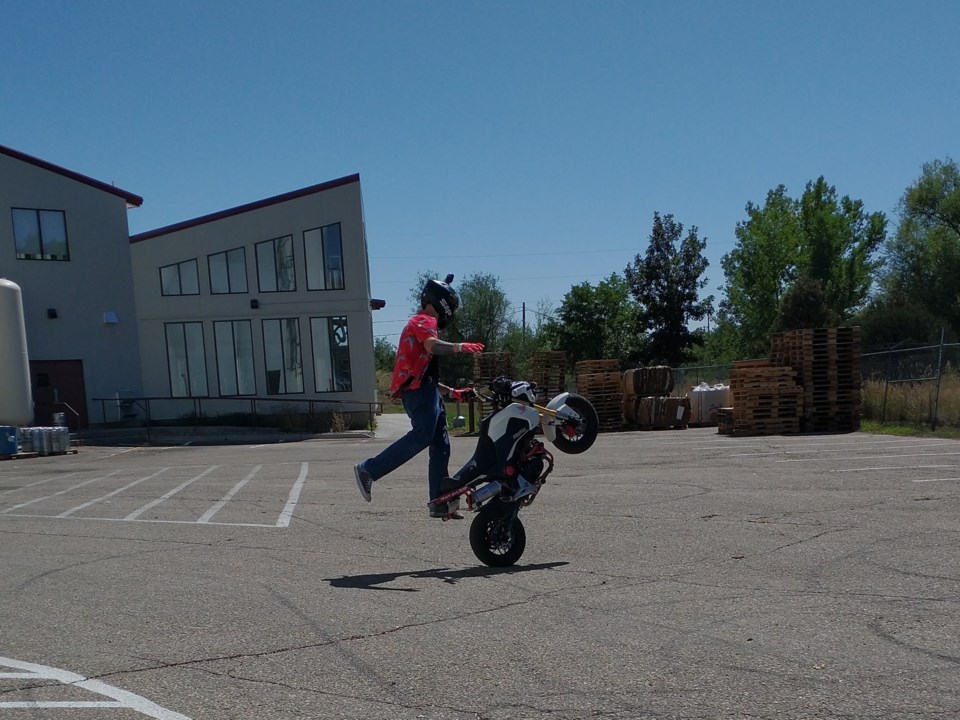 The negative stigma was created by other stunt riders who have participated in events like Kill Da Streetz, Princess Sparkle Pony said.

Kill Da Streetz is an annual event in Denver in which stunt riders take to the streets. In past years, such as 2016, more than 500 riders bogged down traffic as they performed stunts in the middle of Interstate 25. Rider JohnyBonefourthree said there’s “haters out there that bring a negative vibe. But we try to be allergic to that.”

Rider and event coordinator Princess Sparkle Pony said he is always on the lookout for a place his group can practice without breaking any laws. He has been searching for Longmont businesses to sponsor more sanctioned events in their unused parking lots. So far, Left Hand Brewing has been the only one to accept. Krick3t throws his feet over the handlebars. (Photo by Shona Compton)

A Grom is a type of Honda motorcycle typically used in stunt riding.

“There is a perception to get over, he (Princess Sparkle Pony) explained to me that people think they are just a bunch of thugs … but only one person has said anything negative about it (in the tasting room). I’ve never seen any potential for damage,” Delis said. “ I feel they are just having fun and hanging out with each other. They are nothing but mellow and fun and they bring a cool energy here. Left Hand happens to kinda catch a lot of all areas … all I can say is that these guys are yet another cool little pocket that I am glad to have tapped into,” Delis said.

The crowd started small, but there were plenty of patrons who sat in the brewery’s newly extended tasting room space allowed by COVID-19 safety guidelines. Children’s eyes were glued to the riders as they popped wheelies, rode in circles and otherwise twirled around their motorcycles much like BMX stunt riders do on bicycles.

Riders who participated in Sunday’s event varied in experience level, from JohnyBonefourthree who has been riding since he was 2 years old to newcomer Mulan_stunts (Instagram handle) who found the sport only 18 months ago. 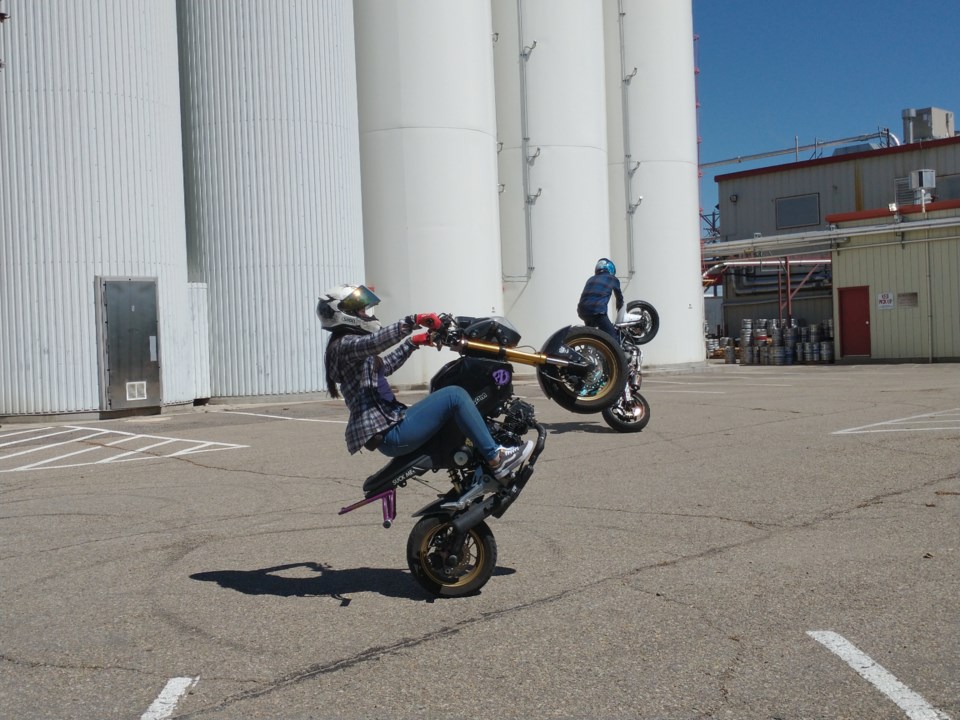 Mulan_stunts pops a wheelie with Krick3t in the background. (Photo by Shona Crampton)

Mulan_stunts said she went to a motorcycle event and saw two Grom riders and knew she needed to have one.

She was so taken by the sport that it influenced her to go to school to be a motorcycle mechanic. She is taking lessons and has learned how to do wheelies and is working on learning how to do circles on the bike.

“It is a hard sport to get into … not a lot of females get into stunt riding because of the fear, the fear of falling, the fear of hurting yourself … but it’s a thrill. You just want to chase that feeling,” Mulan_stunts said.

The highlight of the day were the stunts performed by Denver resident Krick3t. He picked up the sport about 6 years ago after being into bikes since he was a child. 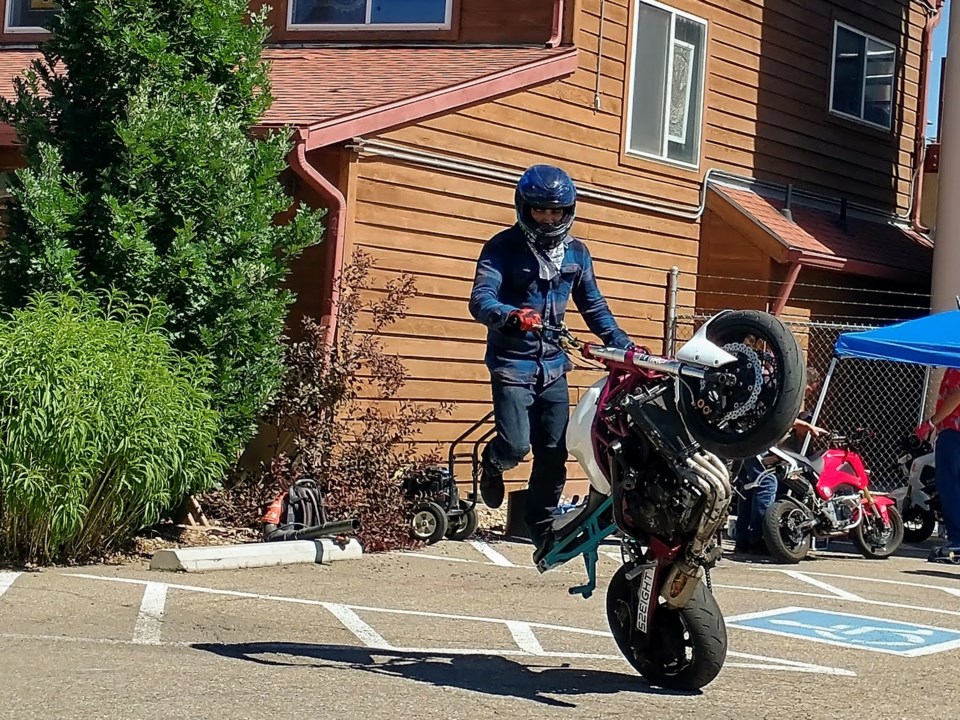 “The sport motivates me, keeps me alive and makes me forget about all the crazy world we live in right now,” Krick3t said.

JohnyB said that Krick3t is one of best riders in Colorado because of the hard work and dedication he has put into the sport in the six years he has been riding.

Despite several broken bones and bruises from falls, Krick3t said he has always been determined to do more and push the boundaries of motorcycle stunt riding. “Like everything in life, you have to get back up and keep going to follow your dream. That’s what it’s all about,” he said.

JohnyB has loved to ride since he was 2 years old when he started with his bicycle. He soon graduated to mopeds and dirt bikes.

“I just love to ride … I just like to push the envelope,” he said. JohnyBonefourthree stops on his front wheel (Photo by Shona Crampton)

All of the riders have a passion for motorcycle stunt riding. Their goal is to entertain and encourage others to follow their dreams by doing the impossible.

“It’s a passion and there are good people we surround ourselves with. (We enjoy) showing people that a guy can stand on top of the forks and go in a circle, it blows people’s minds on how that can be done. I think it also opens the mind for other people to say ‘OK if he can do that, then I can push the envelope in my little area,’” JohnyBonefourthree said. 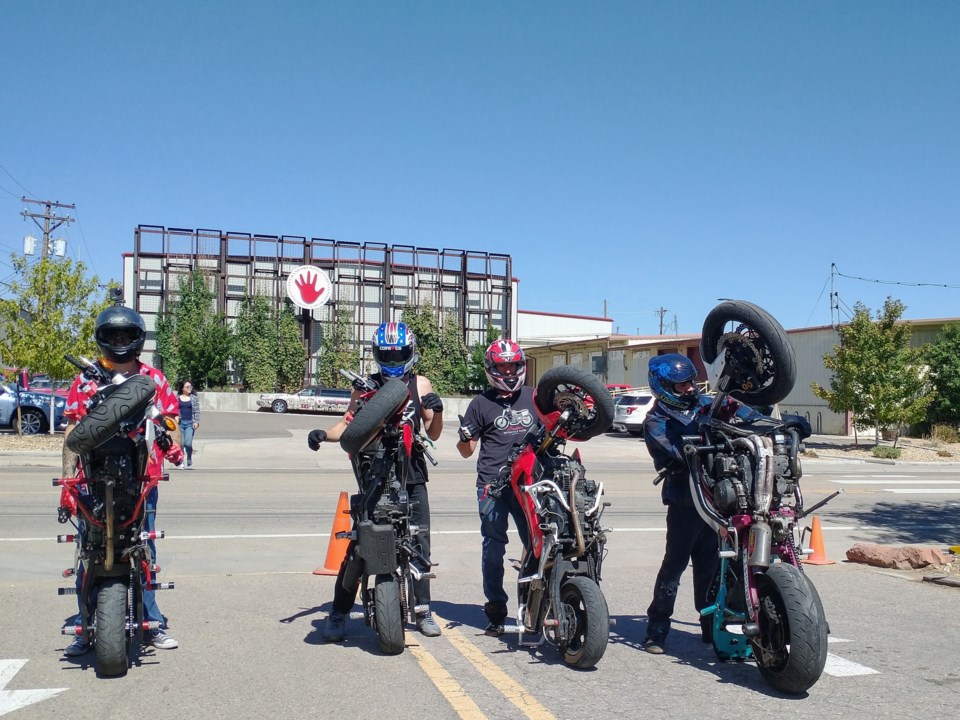 Riders participate in local events as often as possible although the opportunities are few. In addition to small events such as the one at Left Hand Brewing on Sunday, Princess Sparkle Pony said he has approached the city of Longmont to organize a stunt rider parade in Longmont. “I’ve seen it done in other cities with lots of success,” he said.

The talks of such a parade have been put on hold because of COVID-19.

“We are really hoping to expand it to the point that people understand that this isn’t just one person or a criminal activity, that this is just athletes performing some really, really difficult stuff that took thousands of dollars and hundreds of hours to learn,” Princess Sparkle Pony said.

Medical marijuana delivery to Longmont residents to include all state-licensed dispensaries
Sep 23, 2020 11:00 AM
Comments
We welcome your feedback and encourage you to share your thoughts. We ask that you be respectful of others and their points of view, refrain from personal attacks and stay on topic. To learn about our commenting policies and how we moderate, please read our Community Guidelines.