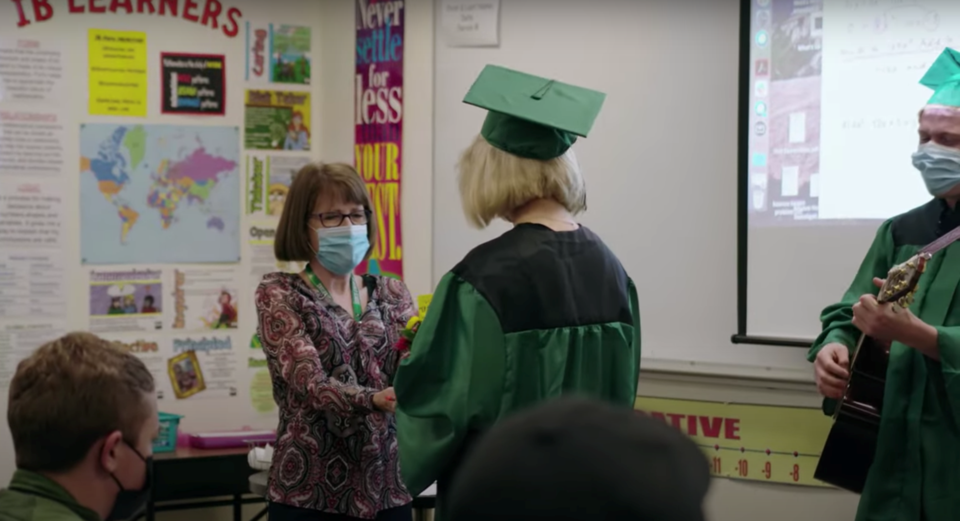 “They really just go beyond just teachers. They’re someone you can look up to and someone who can… change your life.”

This is how Mollie Hervey, a senior at Frederick High School, described the role of teachers in a video the St. Vrain School District produced to mark the start of Teacher Appreciation Week on Monday.

Ten SVVSD high school students paid surprise visits to former middle and elementary school teachers throughout the last days of April to express their gratitude in words and through music, according to Benjamin Kalb, director of communications and digital content.

“In pre-COVID times we do a graduate walk and all high schoolers visit middle (and elementary) schools and do a class walkthrough. It’s so powerful,” Kalb said. “We wanted to create some of that feeling and this allowed us to do that.”

Graduating seniors from Frederick, Niwot, Longmont, Skyline and Mead high schools dressed up in their graduation regalia as they returned to their lower level classrooms across the district.

“The goal was to show that the impact of a teacher is massive and eternal in the life of a student,” Kalb said. “A teacher hasn’t heard from that student in the nine, ten or 12 years ... but the student will never forget the impact they had on that student.”

Grable Howie, a senior at Niwot High School, visited seven former teachers, three who currently teach at Sunset Middle and four at Burlington Elementary, alongside two of his high school peers, he said. His visits not only entailed verbal exchanges of appreciation but a vocal performance of Coldplay’s song, “Someone Special.”

“We chose that song because the lyrics are really just about the fact that … anybody can be special and what really makes them special is their ability to have passion and not give up and really do what they love,” Howie said. “I think that a lot of teachers are like that … they teach because they love to teach and I think often they don't get the appreciation that they deserve.”

One of the teachers Howie surprised was Melissa Real, currently a second grade teacher at Burlington Elementary, who taught him as a kindergartner the second year she was at the school in 2008.

Last Tuesday, Real received an email from Kalb confirming her presence at her classroom for a project the district was working on, she said, adding unbeknownst to her, he really wanted to ensure she would be there for Howie’s visit.

“It was all an elaborate ruse,” she said. “I was finishing a morning meeting and math lesson, suddenly all these people started streaming in, (Howie) and the other two students came in, in their caps and gowns and that always just gets me, seeing these kids who were five-year-olds, (who are) now these adults who are towering over me … reaching that huge milestone.”

“I had no idea. It was a complete surprise and it was overwhelming, in the best way. It was just beautiful,” she said.

Since Howie’s mother, Jennifer Howe, is a staff member at the school, he has continued to stay in touch with Real throughout the years. Also, he has remained involved in the musical productions at Burlington, bringing his experience as a performer, she said.

“Something that that's really, really important to me … is that students find that internal spark and not just do what they're told, but to learn to be those good citizens and find their passion,” she said. “(Howie) is somebody who is just a beautiful example of that, he is talented in every area.”

One of the most lasting impressions a teacher had on Howie was to strive for excellence, he said, “to do every single thing to the very best of my ability.”

Throughout his time at SVVSD, Howie recalls encountering time and time again with teachers who were not only supportive but also kind, continuously seeking to create individual relationships with every student and pushing them to be their very best, he said.

Hadjiyiannis said the students chose teachers that they believe were really influential in their lives.

“I think being a teacher is the most important job that anyone could have,” she said. “Not only do they teach us basic skills like how to read and write, they inspire us and they mentor us, trying to keep us on the right track for the entirety of our young years.”

Seeing teachers cry was very moving but her favorite part was hearing them say “this is why I became a teacher,” according to Hadjiyiannis. “They shape minds and influence everyone that we know. Without teachers we wouldn't be anywhere and it was great to be able to give back to them,” she said.

Tyra Toepfer, the attendance clerk at Burlington Elementary, has held a long-time relationship with both Howie and Hadjiyiannis, supporting their performance career as a voice teacher all through their high school years, she said.

“I guess I think of teacher appreciation as being (only for) classroom teachers. The fact that they asked if they could do this for me meant so much,” Toepfer said. “I strongly feel everyone who works in a school is a teacher in some way or another and (has) a huge effect on the lives of children, so it was awesome that the district was completely ok with them honoring me for teacher appreciation.”

Working with kids always helps put a smile on the faces of those who work around them no matter what else is happening, according to Toepfer, which is why she enjoys being in a school.

“The smiles and hugs and the ‘I love you Ms. Tyra!’ are completely worth everything.   Teachers are absolutely their families away from home. We help teach kindness, manners, conflict resolution, emotion regulation, self-love along with all of the academics,” she said. “That's a lot of responsibility and a labor of love.”

Sally Gillet, a math teacher at Sunset Middle, agrees that being a teacher is never boring  “because it's all about building community with kids and helping them grow, both as academic thinkers but also as people,” she said.

The visit by the three Niwot High seniors was just as much of a surprise for Gillett as it was for the other teachers. She was told the video crew was at the school to capture footage of her classroom and student learning, she said.

“I was totally shocked to see my former students. And when they started singing and I realized that it was about me, I was just blown away.”

Seeing former students once they have grown helps teachers realize the impact their work has and admire the things they are doing as they grow up, she said, and she’s grateful to have the opportunity to be part of their life experience.

“It's humbling to recognize that you played a role in that journey,” she said. “It is an honor and a privilege.”