With Main Street barricades set to come down at month's end, businesses have mixed reaction to COVID-related experiment

As end date of closure of lanes of Main Street draws near, some say the move was worth the effort and good for business, while others say they saw little impact from the effort.
Sep 13, 2020 8:00 AM By: Monte Whaley 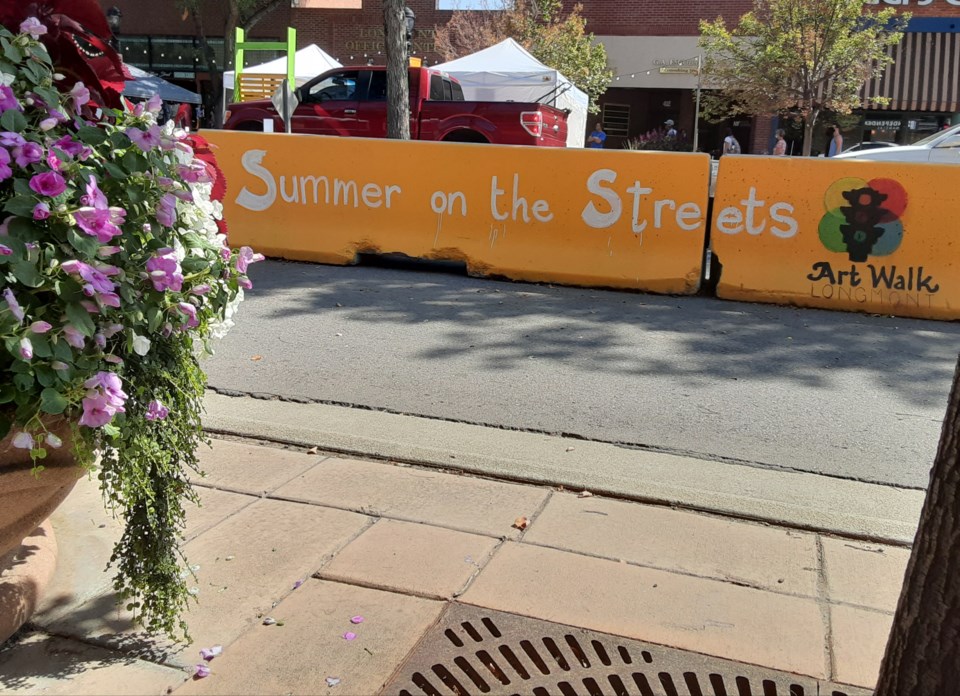 Artists decorated the barricades along Main Street that were added to allow businesses to expand beyond their sidewalks. This barricade celebrates the Longmont ArtWalk Summer on the Streets series that was held on Saturdays. (Photo by Matt Hagerman)

The bid to pump life into Longmont’s Main Street by closing part of the thoroughfare is drawing to a close and some say it was worth the effort.

Others just shrug at the move that shut down portions of Main Street to cars and trucks to draw more pedestrians into shops and restaurants.

“It doesn’t seem to have really affected us,” said Debbie Karle, a co-owner of the Used Book Emporium, a downtown fixture for 23 years. “We did put a table on the sidewalk with some chairs but we really didn’t expand our business at all.

“But it was probably good to try something,” Karle said.

She added that parking behind her business at 346 Main St., drastically improved when city employees began working at home during the COVID-19 outbreak.

“That opened up a lot of parking for customers, that’s been good,” Karle said.

Longmont City Council in June signed off on the plan to close stretches of northbound and southbound Main Street lanes in an effort to boost businesses in downtown hit hard by the COVID-19 pandemic and stay-at-home orders.

The closures, which came at the request of the Longmont Downtown Development Authority, involved placing concrete barriers and traffic-diversion barrels along portions of the street. The effort was aimed at allowing restaurants and retailers to expand outdoor dining and shopping  beyond the sidewalks in front of their businesses, the LDDA stated in a news release announcing the closure plan. Visitors to downtown Longmont, meanwhile, will use the expanded spaces in front of the shops to enjoy the outdoors, the LDDA stated.

The southbound lane of Main Street between Sixth and Third avenues and the northbound lane between Third and Sixth avenues were closed in July. The city also eliminated curbside parking along that stretch.

Some businesses complained the parking plan was too restrictive, prompting the city to alter the closures to start at the middle of the 600 block of Main Street and at the end of Fourth Avenue.

The city agreed to try the closure idea through the summer and the barricades will likely be removed on Sept. 28, said Kimberlee McKee, LDDA executive director.

Although she has not seen sales tax figures from July and August, McKee said the closures helped businesses through the pandemic shutdowns.

“We’ve been pleased with the ability of people to use the extra spaces downtown,” she said. “We’ve had plenty of positive feedback from the community. There have been some mixed emotions about the lack of parking and that kind of thing. But this was a period when we wanted to try it and see what happens.”

“It’s great, it’s been really nice for people who are just able to spread out a little bit more,” Quince said. “We saw a steady increase through this whole period. We put some tables outside and people really embraced it.

“We’ll be sorry to see this go at the end of September,” she said. “It was great while it lasted.”

Curt Collins said the lane closures didn't extend to his business, the Java Stop at 301 Main St. But he still benefited from the increased foot traffic.

“I think on balance it brought a few more people our way,” Collins said. “Otherwise, it didn’t affect us that much.”

Medical marijuana delivery to Longmont residents to include all state-licensed dispensaries
Sep 23, 2020 11:00 AM
Comments
We welcome your feedback and encourage you to share your thoughts. We ask that you be respectful of others and their points of view, refrain from personal attacks and stay on topic. To learn about our commenting policies and how we moderate, please read our Community Guidelines.